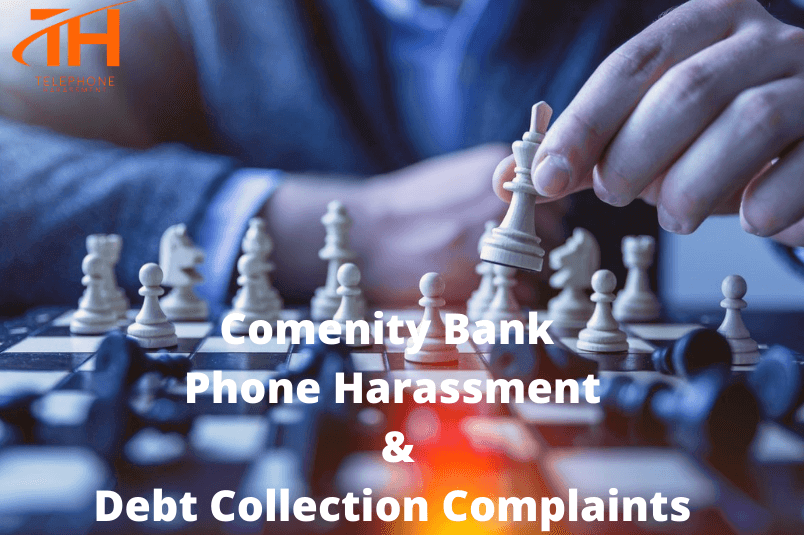 Even if you haven’t heard of the name “Comenity bank,” chances are you, or someone close to you has used a credit card issued by the company. Comenity bank provides credit card services to over 50 million Americans today.

Partnering with more than 145 esteemed retailers across the globe, Comenity Bank has a huge portfolio of customers. Also referred to as Comenity Capital Bank or Comenity LLC, the organization has carried out successful business operations for over 30 years.

Are all of the card members happy with their service? That is a million-dollar question! The golden point to be noted here is that Comenity Bank is a financial services firm. Which is in fact well known for its debt collection harassment.

What counts as Debt Collection Harassment?

If the calls from the Comenity bank are causing you distress and invading your peace and privacy, you may have a valid case of debt harassment. There are certain behaviors that are not permitted by law on the part of a debt collection agency, and if such behavior has been carried out towards you, you are entitled to sue Comenity bank for a chance to get compensation and/or have your debt waived. Such impermissible behaviors include:

• Placing a call to you at any time of the day like late at night or early in the morning.
• Physical visits to your home or workplace.
• Verbal abuse, threats, or coercion orally and physically.
• Threats of legal action they have no intention of carrying out.
• Misrepresentation of the truth or falsifying information regarding the debt or your credit report.
• Talking to your friends, neighbors, and relatives about your unresolved debt.
• Using social networks to stalk you and retrieve personal information.
• Deceitful paperwork stating that the debt has been transferred to the police or to the court.
• Suggestions regarding selling your property or other assets to clear the debts.
• Misrepresentation of your identity or impersonating a law enforcement/court official.

Comenity Bank – Who Are They & What They Do?

Comenity Bank is a credit as well as debit card issuer of leading retailers and eminent corporations. Headquartered in Columbus, OH, the bank also offers underwriting and fund purchase services. The business was once known as World Financial Network Bank but re-branded itself in 2012 as Comenity Bank. It is a subsidiary of Alliance Data Systems Corporation.

Comenity Bank claims that they have been connecting customers with their beloved brands from the past 30 years, and further has a portfolio of nearly 150 retailers to prove it. The company’s leading retailers include Victoria’s Secret, HSN, Ulta Beauty, Bed Bath & Beyond, New York & Company, West Elm, Ann Taylor, Crate & Barrel, and many more.

Its in-house collection and billing department has been receiving complaints from consumers. They complain about financial crimes and threats received from the bank’s representatives. There are thousands of unrelenting calls made through various phone numbers to unsuspecting victims daily. These complaints amount to debt collection harassment.

With a website that hosts about 50 million card users daily, receiving harassment complaints from customers and being linked to alleged scams are too serious to ignore. Comenity Bank‘s official website claims that they are providing true standards of services. Their award-winning Care Center Services are also up to the mark. Yet, the Better Business Bureau (BBB) fails to recognize this claim. BBB is still unable to resolve principal causes of the continuous pattern of complaints against them.

What are the complaints about? Consumer targeting and repeated unsolicited telephone calls. In cases of debt collection, the bank keeps on calling even when asked to stop. This intrusion of privacy amounts to phone harassment. The Federal Communications Act, specifically 47 U.S. Code § 223 prohibits this act as per law.

How does Comenity Bank collect Debt?

Comenity Bank issues credit cards and debit cards on behalf of its partner retailers. They also offer underwriting and fund purchase services and consumers get loans from them. Just like any other financial institution, Comenity Bank also reserves the right to collect the debts when the time comes.

What makes their practice illegal is the way they proceed with the debt collection. If the consumer is not able to pay off their loans or clear off their credit or debit card pending dues, they start receiving several pestering calls. As per the law, creditors are allowed to initiate action for debt recovery. But there are certain rules that have to be followed when the debt collection process begins.

Sadly, Comenity Bank employs misleading strategies to collect debt from other people. They threaten the customer or call them as many times as they can. As the FDCPA and TCPA state, badgering calls are a form of debt collection harassment. They also use robocalls and prerecorded messages to encroach on the privacy of the debtor.

In a research conducted on the customer satisfaction ratio with Comenity Bank services. 107 out of 111 respondents, gave them 1 star out of five. Comenity Bank may also choose to delay the posting of your payment on purpose. This malicious act is profitable to them, however, it leads to additional delay charges on late payment clearance on your end. The company is also suspected of presenting consumers with fraudulent credit reports with falsified charges.

Be aware! Comenity Bank may use one of these phone numbers to harass you

Phone harassment from Comenity Pank is a serious matter. They likely use hundreds of different phone numbers to call consumers ceaselessly over their defaulted debt. Complains against Comenity bank are endless, so here are a few phone numbers from which you might receive a call:

Since 2015 till date, the CFPB (Consumer Financial Protection Bureau) has logged more than 700,000 complaints against Comenity Bank scams. The most popular one is Victoria’s Secret harassment complaints. The consumers of Comenity bank’s Victoria’s Secret credit card have faced a higher number of threats and harassment.
The bank is alleged to collect debts through false statements. They have fabricated credit reports and issues several threats during the endless phone calls they place to debtors. In the last three years, the BBB has also listed nearly 2000 complaints against them.
Users online don’t have anything positive to say about Comenity Bank either Out of 396 reviews online, 391 are completely negative.

How to Stop Comenity Bank Scams and Harassment

Remember, Comenity Bank has no right to oppress, harass, or intimidate you. Your best bet is to hire a skilled and A+ accredited attorney, and that is why we are here to help you win your case of debt collection harassment against Comenity bank. You do not have to worry, reach us NOW on 844-791-1990 and let us take it from there.